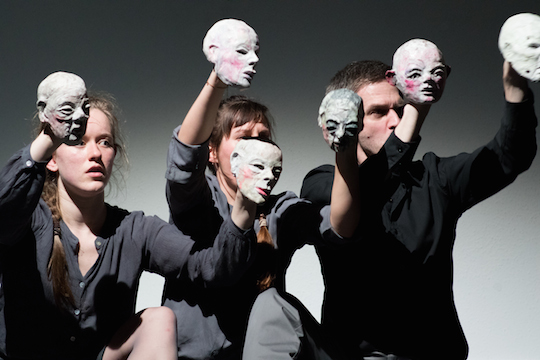 © Andràs Gobi. The puppets are on loan from the Puppetry Department of the Ernst Busch Academy of Dramatic Arts as well as Magdeburg Puppet Theatre.

The Jewish dancer and dance teacher Roosje (Rosa Regina) Glaser was born in Amsterdam in 1914. She went underground in 1942 after Hitler had invaded the Netherlands but was betrayed by her ex-husband and deported to Auschwitz in 1943. Drafted into forced labour in the Union munitions factory, she got to know one of the SS officers and suggested to him that she sing and dance for the SS in the evenings. She was soon teaching ballroom to the enemy and became a ‘prisoner functionary’, which saved her life.

At Theater Nordhausen, Bianca Sue Henne and Jutta Ebnother have merged dance, puppet theatre and acting in a single show. Their production used original texts as well as powerful, moving images to stage the story of Rosa Glaser, who danced for her life in Auschwitz.