After the national initiative for dance in Germany Tanzplan Deutschland  (2006 – 2011) came to an end, the Kulturstiftung des Bundes (German Federal Cultural Foundation) launched TANZFONDS PARTNER (Dance Partner Fund, 2011-2014) and TANZFONDS ERBE (Dance Heritage Fund, 2011-2019). As project executing agency, DIEHL+RITTER gUG was responsible for the conception and design of both funds, with Madeline Ritter as project director.

The last application term ended at October 31, 2016. Further applications are no longer possible. 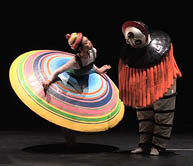 Funding for artistic projects dedicated to the cultural heritage of dance

For many years, the history of modern dance was only visible to a limited extent in the public sphere – despite the fact that the international reputations of numerous artists such as Mary Wigman, Dore Hoyer, Tatjana Gsovsky, Rudolf von Laban, William Forsythe or Pina Bausch began in Germany. The processing of historical material is indeed time-consuming, copyright issues are often unclear and use rights, e.g. for original music, are expensive.

In order to close these gaps, the Kulturstiftung des Bundes (German Federal Cultural Foundation) initiated TANZFONDS ERBE and endowed the initiative with a funding volume of around 6 million euros. Madeline Ritter, the former director of Tanzplan Deutschland, and Ingo Diehl, the former director of the education department of Tanzplan Deutschland, were responsible for the content concept. Both Ritter and Diehl deliberately chose to avoid determining a canon of key dance works from history. They wanted applicants to decide on the works themselves and to argue why their chosen historical choreographers, works and themes are significant today. This open approach facilitated the possibility of accessing dance history from a wide variety of entry points.

A total of 60 projects were selected. Successful entries were model projects for dealing with dance history in an artistic way: artists used a wide range of archives for their research, worked closely with experts and also contributed to the clarification of copyright. The artistic results of these processes established public access to a lively dance history that has until then only been available to a few experts. The resulting productions were included in the season programmes of the theatres and companies involved. A guest-performance fund for TANZFONDS ERBE projects, which was set up in 2014, supported the national visibility of the productions.

The projects funded by TANZFONDS ERBE were documented by DIEHL+RITTER, in their entirety until 2014 and then selectively. The documentations offer an insight into the origins of projects as well as their research and production processes. They are a central element of this website. The wealth of information also acts as valuable study material for future researchers and artists, facilitating in-depth work with German dance history.

TANZFONDS ERBE was thereby providing fresh impetus for conveying dance in innovative ways, strengthening the visibility of dance history, and at the same time adhered to the aims of the UNESCO Convention for the Safeguarding of Intangible Cultural Heritage.

Funds for partnerships between dance institutions and schools

TANZFONDS PARTNER (Dance Partner Fund),TANZFONDS PARTNER, funded by the Kulturstiftung des Bundes (Federal Cultural Foundation) with 2.5 million euros, facilitated partnerships between dance institutions and general education schools. The aim was to give school pupils an opportunity to take part in and experience dance as part of everyday life in theatres – and this at the highest artistic level.

Each partnership funded by TANZFONDS PARTNER involved one dance institution and one school, which in turn led to a particularly close relationship between the partners involved as well as a co-operative alliance that continued to operate even after the funding period came to an end.

Both dance artists and young people profited from new experiences when they met up for the projects. Dancers and choreographers had to convince and convey, question their own viewsand see themselves from outside, the results of which they could take back to their own institutions.

From 2011 to 2014, twelve projects across Germany were funded as part ofTANZFONDS PARTNER. The fund is now closed and it is no longer possible to submit an application for funding.

All projects funded are documented and archived on the TANZFONDS PARTNER website.