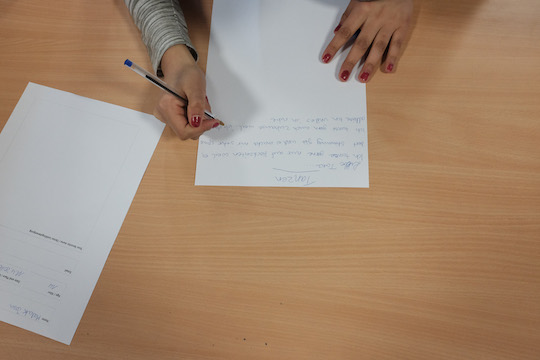 Rather than a representation or selection of historical dance events, or even a reconstruction of performances from the past, the Just in Time project by the Berlin-based ‘artistwin’ deufert&plischke instead saw dance heritage as a process involving people’s individual experiences.

Over three years, deufert&plischke were joined by fellow artists on a search for traces in Berlin, New York and Tel Aviv, where they wrote letters to dance with the inhabitants of these three cities. The resulting collection of letters was intended as a temporary local archive, presenting not only wholly different dance experiences and memories but also stereotypes and clichés. The letters describe defining moments and epiphanies, or even misunderstandings and disappointments, the main point being that they provide a wholly personal view and thereby establish a tangible relationship with dance as a sensual and subjective medium. The local archive in no way claims to be complete or comprehensive, of course, but it was aiming for the highest possible level of participation.

At the end of the project’s visit to each of the cities, local participants were invited to a big ball to dance a choreography created by deufert&plischke on the basis of the letters written.

The letters collected were also published in English in 2018 and can be ordered from the theatre bookstore EINAR & BER.

The video is a deufert&plischke production.

The video is a deufert&plischke production.

Henrietta Horn’s reconstruction of Mary Wigman’s 1957 version of The Rite of Spring was enthusiastically received by critics.MORE

Choreographers Christina Ciupke and Anna Till looked at how information about past dances by Mary Wigman, Kurt Jooss, Dore Hoyer, Pina Bausch and William Forsythe has reached us today.MORE