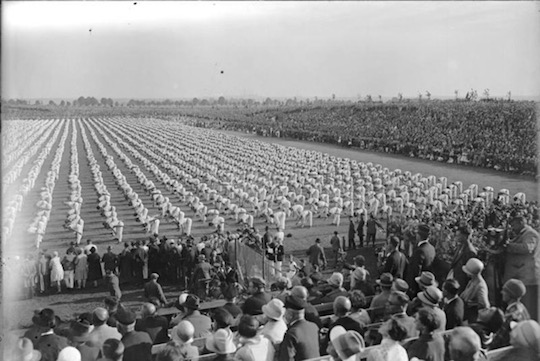 In its TANZFONDS ERBE project, the artist collective HAUPTAKTION was looking at a chapter of 20th century German dance history that until now has attracted only a little amount of interest: using the choreographic material from the German gymnastics movement as its basis, the collective was investigating the link between the body and nationalism.

Starting from the working hypothesis that the story of German nationalism can be told using the practices and discourses of the historical gymnastics movement, a diverse group of eight performers themselves became gymnasts.

They were learning and embodying the gymnastic practices in an eight-month auto-ethnographic study – comprising expert seminars, gymnastic workshop and rehearsals – with the aim of reconstructing and rehearsing historical and contemporary exercises and choreographic elements.

This theoretical and practical research resulted in a theatrical essay in November 2017 – a gymnastics show on German nationalism located between contemporary dance, drill and lecture performance.

Jutta Hell and Dieter Baumann were passing on Bohner’s later work, which the choreographer developed with them in 1991, to a younger generation of dancers. MORE