The artistic directors and choreographers talk about the project in the documentation for the closing festival.

The Berlin dancer Julius Hans Spiegel made a name for himself across Europe in the 1920s with his “exotic dances”. Many European dance creators, including prominent figures such as Mary Wigman, turned towards extra-European cultures in order to discover new body and movement images.

In the same way that Julius Hans Spiegel’s story disappeared, the fact that extra-European body techniques were a central reference for modern dance, and whose legacy is still visible in dance today, slipped from everyday consciousness.

The Julius Hans Spiegel Centre, which opened its doors at Theater Freiburg from the middle of January until the start of April 2014, used performances, films, lectures, artist discussions, workshops and tours to take a closer look at this lost chapter in German dance history. Five choreographers from South Africa, Algeria, Indonesia, Netherlands and Austria developed performances using archive material that continued/rewrote this story, dug up forgotten aspects of it andreversed the pervading perspective to ‘exoticise the modern’.

In the documentation for the closing festival (see above), the artistic directors Anna Wagner und Eike Wittrock, as well as the artists involved, namely Nacera Belaza, Eko Supriyanto, Nelisiwe Xaba, and Florentina Holzinger & Vincent Riebeek, talk about the different facets of exoticism and their relationship with dance heritage. Short clips of all performances are also shown. 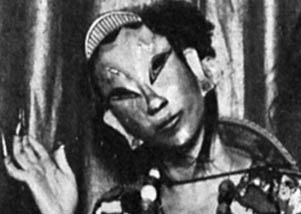 Julius Hans Spiegel was born in Berlin in 1891, the son of German-Jewish parents. He lost his hearing during an illness at the age of three. After the early death of his parents, he grew up in the boarding school of the Königlichen Taubstummenanstalt zu Berlin (Berlin Royal Deaf-Mute Asylum). He studied painting in Berlin and Munich and is then reputed to have met a Javanese prince who taught him dance and possibly had a relationship with him.

The prince left Spiegel a collection of Asian masks and garments after his death. Spiegel then studied dance with Raden Mas Jodjana and probably Max Terpis, director of the ballet company of the Berlin Staatstheater. From the beginning of the 1920s, he performed in cabaret and variety shows, as well as private events, as grotesque and exotic dancers and often without musical accompaniment. He performend, for example, at the Berlin Expressionists’ Sturm-Abenden (Storm Evenings) in 1926, at Magnus Hirschfeld’s Institute for Sexual Research, at Jane Marnac’s Shanghai revue at the Apollo Theater in Paris, as well as dance segments in showings of Lola Kreutzberg’s cult film Bali, das Wunderland (1927).

Spiegel made guest performances in Milan and Rome, where he was funded by members of the Futurist movement. His interpretations of Japanese, Indian, Indonesian and Chinese dancers in original masks and costumes were characterised by intense rhythms and expressive clothing.

As a gay Jewish artist, he fled Germany in 1934 and went to Capri, where he became a local celebrity and featured on a postcard. He earned his living by teaching dance to young American girls and by selling his paintings, and he was used to promote Gaggia coffee machines and Carpano vermouth, and to attract gay tourists to Capri.

He was friends with the British ballet dancer Anton Dolin, Thomas Mann and the ice-skating couple Ernst und Maxi Baier, and got to know Hollywood greats such as Liz Taylor, Orson Wells und Clark Gable. He died on Capri in 1974.

His collection of east Asian and African masks and costumes is today housed at the State Museum for Ethnology in Munich, which his artistic legacy – photographs and letters – is at the German Dance Archive in Cologne.

Nacera Belaza’s choreographies draw spectators into a maelstrom of movement perception. Whether solos, duets or group works, her repetitive and meditative dances create a concentration and reverberation space in which fluctuations are carried over from one body to another. The circle thereby forms a central choreographic figure – for examplethe turn of an individual body or the movement of an entire group.

At the Julius Hans Spiegel Centre, Belaza looked at Mary Wigman’s aesthetic and used it to re-read her own choreographic research, which she conducted into various ritual dances in North Africa. In the closing festival, she presented a preview of her piece Les Oiseaux, which was premiered at the Montpellier Danse festival in June 2014 and was influenced by the research carried out at the Julius-Hans-Spiegel-Zentrum.

Nacera Belaza was born in Medea, Algeria. She moved to France with her family at the age of five. After studying literature, she dedicated herself to dance and founded her own company in 1989. Her work Le Cri, which marked the start of her research into the dialogue between ritual and contemporary choreographic composition, was named Choreographic Discovery of the Year 2008. Les Sentinelles, Le Temp scellé and Le Trait continue the search for a hypnotic access to movement. Belaza’s pieces are shown regularly at well-known festivals.

During her residency at the Julius Hans Spiegel Centre at Theater Freiburg, Nelisiwe Xaba developed a dance evening based on programmes by dancers such as Mary Wigman and Sent M’ahesa. In the 1910s and 20s, these pioneers of modern dance always showed a series of short pieces with musical accompaniment. They covered different worlds and eras that were far apart from each other, at least by their imaginations, e.g. a temple dance was followed by an Indian dance, an arabesque or a Siamese dance.

In all of her works, the Johannesburg artist Nelisiwe Xaba, who is one of South Africa’s most successful choreographers, is looking at the European image of “African dance”. Her dance evening with “foreign dances” reverses the perspective and exoticises the Black Forest.

The dancer and choreographer Nelisiwe Xaba was born in Soweto, South Africa. She trained in dance in Johannesburg and London. Before she began to develop her own choreographies, she danced in South Africa in the Pact Dance Company and worked with the choreographer Robyn Orlyn among others. Her work is exhibited by the well-known Goodman Gallery in South Africa.

AN EVENING OF BEAUTY IN THREE ACTS:
VICE, GREY AND ECSTASY DANCES

Florentina Holzinger and Vincent Riebeek have been artists in residence at Theater Freiburg since the start of February. In the collection at the Julius Hans Spiegel Centre, they came across a series of dance partnershipsfrom the modern era that could unknowingly become role modelsfor their radical, collage-like performance evenings. In their works for the Julius Hans Spiegel Centre, Holzinger and Riebeek are superimposing the private and professional lives of couples such as Anita Berber and Sebastian Droste, Vaslav Nijinsky and Bronislava Nijinska,or Clotilde von Derp and Alexander Sacharoff, who all created more or less exotic dances and articulated their avant-garde breaking of boundaries through the fantasies of the other.

It is a rare thing to be able to experience the connections between obscenity, beauty, provocation, tenderness, revulsion and intimacy as portrayed in the choreographic works of theartistic duo Vincent Riebeek and Florentina Holzinger. Shunning cultural, social and aesthetic borders, their works link set pieces from high and popular culture.

Esoteric movement practices andreferences from body art meet the look of music videos and quotes from dance history, from the Ballets Russes to Merce Cunningham. The partnership between Holzinger, who was born in Vienna, and Riebeek, who is Dutch, began during their studies at the Amsterdam School for New Dance Development.

They called their final project work Kein Applaus für Scheiße (2011) (EN: Don’t Applause for Shit), which quickly won them a reputation for being Europe’s most provocative young choreographers. With Spirit (2012) and Wellness (2013), their oeuvre grew into a radical, unparalleled trilogy. The Schönheitsabend in Drei Akten (EN: Evening of Beauty in Three Acts) (2014) takes them deeper into dance history and positions both these exceptional artists in a long genealogy of transgressive choreographic partnerships.

On the trail of Julius Hans Spiegel

In his work for the Julius Hans Spiegel Centre, Eko Supriyanto and Lua Leirner looked at the artistic oeuvre of the man at centre of Freiburg’s TANZFONDS ERBE project.

Julius Hans Spiegel fascinated spectators with his extraordinary movement vocabulary and because of the fact that he danced without music, accompanied only by a gong and other percussion instruments. As a representative of modern dance, he attempted to emancipate movement from music make a radical break with the dominant ballet tradition. As a deaf man, he sought other ways to link sound, movement and the body. The Javanese music and movement cultures, which are characterised by very differentiated rhythms, proved to be an ideal connecting factor for him.

During his time in residencyin Freiburg, Supriyanto used the few remaining photos to reconstruct dances by Julius Hans Spiegel and to create two solos danced by Lua Leirner and himself. In their work together, Supriyanto and Leirner link elements from classical Javanese dance, pencak silat (Indonesian martial arts) and gestures together. They use this new movement vocabulary to question Spiegel’s biography and the relationship between foreign and own, understanding and not understanding, silence and noise, gesture and dance, and symbolic expression and materiality.

Eko Supriyanto is one of Indonesia’s most significant choreographers. He started training in classical Javanese dance and pencak silat (Indonesian martial arts) at the age of seven. He then studied dance and choreography at the University of California, Los Angeles, where he later returned with a Fulbright Scholarship for his dissertation project. He became famous in Indonesia after becoming a dancer on Madonna’s Drowned World Tour. He has worked with choreographers such as Lemi Ponifasio and Arco Renz, as well as directors such as Peter Sellars. He has appeared as an actor in films and was choreographic adviser for the musical The Lion King. He is the founder and artistic director of Solo Dance Studios in Surakarta, Indonesia. He own works are shown at key festivals in the USA, Europe and Asia.

Julius Hans Spiegel was born in Berlin in 1891, the son of German-Jewish parents. He lost his hearing during an illness at the age of three. After the early death of his parents, he grew up in the boarding school of the Königlichen Taubstummenanstalt zu Berlin (Berlin Royal Deaf-Mute Asylum).

Under the direction of Steffen Fuchs, Ballett Koblenz restaged two choreographies by Uwe Scholz – Dans la Marche and Die 1000 Grüße. Fuchs rounded off the evening with a homage to Scholz. MORE

Oskar Schlemmer’s Bauhaus Dances – created from 1926 to 1929 – were re-interpreted with students from the Anhaltisches Theater Dessau and the Inter-university Center for Dance (HZT) Berlin. MORE