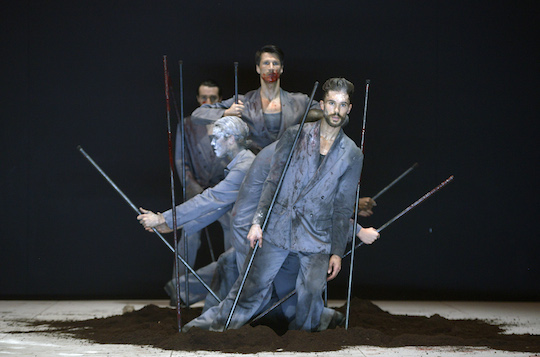 This is the second work by Reinhild Hoffmann which was restaged as part of TANZFONDS ERBE. In 2012, Theater Bielefeld presented Hoffmann’s choreography Auch. 2016 Staatstheater Braunschweig was taking a look at Zeche Eins, which was premiered in Bochum in 1991, and performed it under the new title Jagd. Kampf. Rausch.

In Zeche Eins, Hoffmann explores archaic rituals and mythological themes in an attempt to get closer to the origins of our western culture, and is particularly interested in the significance of dance in hunting, fighting and frenzy rituals.

The piece marked a clear break in Hoffman’s creative output. At the start of the 1990s, she decided to abandon her entire repertoire to date, as well as the touring associated with it, and instead began looking at ancient material. The pieces that followed were marked by a radically reduced décor and design vocabulary.

R. Hoffmann in a discussion with deufert&plischke
MORE

The Art of Movement

The film by the young dancer Boglárka Börcsök looks at a piece of German-Hungarian dance history and studies the movement of the body within the context of political ideologies.MORE

There are practically no court proceedings against plagiarism in dance. You could be forgiven for thinking that the dance world is full of saints, but that’s not the case. Author Klaus Kieser discusses the theft of ideas in dance history.MORE