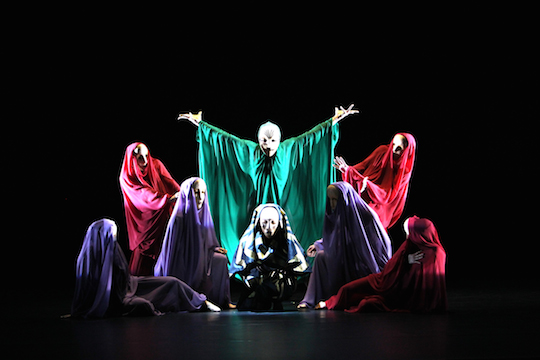 In February 2017 the theatre was re-staging two smaller but no less important works by Wigman: Totentanz I (Dance of Death I) originally performed by Wigman, Gret Palucca, Berte Trümpy and Yvonne Georgi in 1921 to music from Danse Macabre by Camille Saint-Saëns, as well as Totentanz II, which Wigman created for her dance company in 1925 to music by Will Goetze. The painter Ernst Ludwig Kirchner followed the rehearsals for Dance of Death II in Dresden as a ‘silent partner’ and produced numerous sketches of the dancers.

Both pieces, which are part of SBO’s Danse Macabre evening, are indicative of the content and style of German Expressionist Dance in the 1920s, and they were followed by dances of death produced by Harald Kreutzberg (The Eternal Circle: A Legend of Death) and Kurt Jooss.

For the Dance Macabre evening, Wigman’s two works were accompanied by a new piece by Mauro de Candia to Stravinsky’s version of Le Sacre du Printemps for two pianos, as well as Marco Goecke’s choreography Supernova.

The project, which was carried out in co-operation with Felix Nussbaum House, the Kunsthalle Osnabrück and the Diocesan Museum Osnabrück, was also looking at the dance-of-death theme as the experienced reality of economic depression, war, dictatorship and murder in exhibitions, symposia and other formats.

In the interview, Brigitta Herrmann and Katharine Sehnert look back on their training with Mary Wigman and talk about their role in the reconstruction of 'Le Sacre du Printemps' at Theater Osnabrück.

Dance notes, choreographic notations, experience reports, photography, video and much more besides can be used to archive dance, yet one question always remains: How do you pass dance on?MORE