WHAT THE BODY REMEMBERS

The legacy and heritage of dance is immaterial. Yet contemporary dancers and choreographers are still building on an incredibly rich and powerful modern history, which covers more or less the entire 20th century. Artists such as Isadora Duncan, Mary Wigman and Valeska Gert stand for emancipation, for liberation from gender roles, for utopian awakenings and political appropriation, but also for resistance against societal conventions. Post-war modernism behaved in similar ways, be it dance theatre in Germany, Butoh in Japan, modern and postmodern dance in the United States or contemporary dance in France and Belgium.

They each contribute to The Century of Dance, a subject to which the Akademie der Künste was dedicating an exhibition, a festival, an international campus and a book publication late summer 2019, knowing full well that this was assuming a perspective from Germany and Europe.

The topicality of Germany's dance heritage is gaining momentum and visibility worldwide, above all through the activities of TANZFONDS ERBE over the past eight years.

In the special event series at the Akademie der Künste's Hanseatenweg venue, the heritage of Expressionist dance as well as pieces ranging from Merce Cunningham and Tatsumi Hijikata to Anne Teresa De Keersmaeker and Xavier Le Roy will be performed as contemporary art.

A programme of the Akademie der Künste, Berlin. In cooperation with DIEHL+RITTER and the German Federal Cultural Foundation.
Funded by the Federal Agency for Civic Education (bpb) and the Institut Français Germany. In collaboration with Tanz im August and Hamburger Bahnhof – Museum für Gegenwart – Berlin. The Master class will supported by the Sharing Heritage program.

The following essay by Madeline Ritter and Franz Anton Cramer was published in the reader „The Century of Dance“ (Alexander Verlag Berlin, 2019).

Statements on the dance heritage
MORE

Since the beginning of the 20th century, dance has developed into one of the most important art forms in the Western canon. However, in contrast to, say, visual art, it has produced no artefacts preserved in museums. The most ephemeral of all the arts, dance is, in the truest sense, an intangible cultural good. Preservation of its heritage is inconceivable without direct physical practice, without transfer from dancer to dancer. But, in addition to dance artists, a large number of other people also dedicate their work to the cultural heritage of dance: curators, sponsors, teachers, theatre directors, scientists and historians. On the occasion of the exhibition entitled What the Body Remembers. Dance Heritage Today at the Academy of Arts, we asked seven of these ‘heritage bearers’ for wholly personal statements that we have compiled for you below. 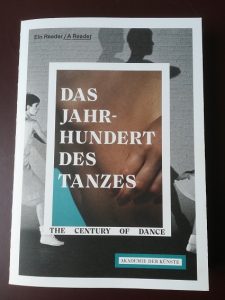 „The Century of Dance“
Publication of the exhibition
„What the body remembers. Dance heritage today“