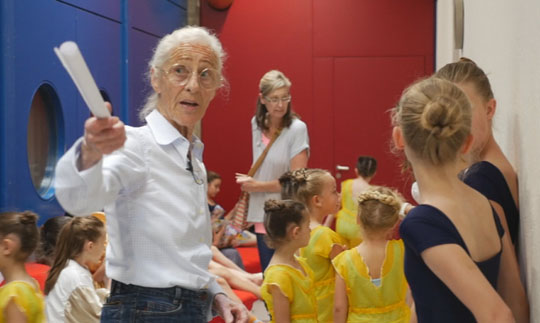 The film project focused on the reflections of six protagonists who had a major impact on the dance landscape from post-war Germany up to the turn of the century. The death of artistic contemporaries always results in the additional loss of an important part of biographic, dance-historical evidence, even if the subsequent generation is left repertoire choreographies, books, photos, articles and reviews.

The six portrait subjects are Klaus Geitel (b. 1924), Nele Hertling (b. 1934), Gisela Peters-Rohse (b. 1938), John Neumeier (b. 1939), Johann Kresnik (b. 1939) and Susanne Linke (b. 1944). Interviewed by an experienced dance journalist, each contemporary witness talks about key developments in German dance history, from a modern day perspective, as well as their own role in it.

Taking up the tradition of ‘oral history’, the aim of the project was to make the entire breadth of German dance heritage accessible to a wide audience in a lively way.

Dresden’s independent dance scene is bringing the former Wigman School at Bautzner Straße 107 back to life with a programme including dance works, master classes and Workshops.MORE