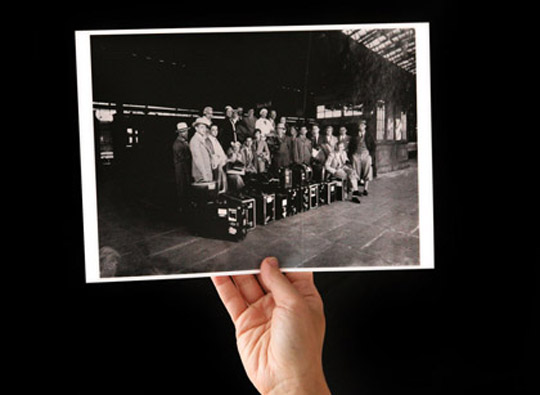 For a long time, dance had a completely different role than being art: it was far more a social practice that had a structural significance in many areas of life, e.g. in community building, in teaching gender relations, and at religious festivals. Analysis of dance history is today still hovering between the view of dance as a basic human need and the modern phenomenon of dance as its own form of artistic expression.

In recent years, the German Federal Cultural Foundation has launched several initiatives to promote both the processing of the past as well as the archiving and accessibility of historical material on dance. Current examples are Tanzfonds Erbe, which funds artistic works dedicated to the cultural heritage of dance, the archive projects by William Forsythe (Motion Bank) and the Pina Bausch Foundation (Pinas Archiv), as well as the on-line archive Digitaler Atlas Tanz.

Given the fact that the lion’s share of the government’s cultural funding budget is used to protect material assets, monuments and buildings while dance, an intangible art form, has to date been completely overlooked, these initiatives can be seen as turning points. At the same time, they tie in with research that had already been started in the interwar years.

In his World History of the Dance (first published as Eine Weltgeschichte des Tanzes in 1933), the scholar Curt Sachs, who had to emigrate shortly after the book’s publication, attempted to produce a global typology of folk dance, dedicating only a few sides to contemporary avant-garde dance forms, e.g. expressionist dance or dance theatre. Important for Sachs, as well as an entire generation of researchers, was the “tradition chain”, i.e. the passing on of dance knowledge from one generation to the next, from one living environment to the next, from one body to another.

How do you continue tradition via the medium of the body? At issue was the contrast between tried-and-tested, canonised forms and radical new creations. Creative-artistic freedom, which enjoys immensely high standing in Europe, remained a conceptual problem: dance was fixed in its spectacular appearance, e.g. in the form of ballet. Innovations delighted many observers but shook existing definition systems and thereby the way aesthetics was usually understood.

Alongside ethnological perspectives and their documentary approaches consisting of a declared intent and age-old preservation methods (for example Rolf de Maré and Margaret Mead’s film expeditions to Indonesia in the 1930s and 40s, Jean Rouch’s films on West Africa in the 1950s and Leni Riefenstahl’s lascivious Nuba film), the artistic side soon starting looking for possibilities to record individual dance works including their kinetic achievements. The outcome included dance notes, choreographic notations, experience reports and much more besides, including, of course, photography and video.

Despite all these efforts, it was still not possible to pass on movement itself. Other methods needed to be found to share the reality of mainly artistic dance and its social impact. And if passing on an actual dance event – as a performance of movement – is impossible, its context remains concrete and can be used in remembrance culture in dance, even if the appearance is lost. The legacy of the art form is preserved in it, and this is then always accessible in the present. The possibilities – and instruments – for a form of contemporary artistic practice that shows that, ultimately, nothing in the history of bodies and their potential for representation is lost start here. The mission is to embark on a constructive handling of dance heritage.

If there is currently a broad interest in historical dance works then essentially two media are available: newspapers and imagery. This is particularly noticeable in Oskar Schlemmer’s famous work Das Triadische Ballett (EN: The Triadic Ballet), which was completed at the Bauhaus building in Dessau and is currently being revised at the Bavarian State Ballet as part of the Tanzfonds Erbe programme.

Schlemmer dedicated himself to the systematic research of form in space and time – i.e. in movement – without focusing on the depiction of human emotions. The Triadic Ballet is therefore above all an image event: costumes, sketches and photographs give an impression of events on stage. The choreographer Gerhard Bohner, born in 1936, saw in Schlemmer’s research a kind of alternative concept to the pathos of modern dance and he used the wealth of image material available to reconstruct a moving stage piece that was performed around 90 times around the world between 1977 and 1989 and thereby became etched in a collective memory.

Since 2004, the Spanish choreographer Olga de Soto has been developing the opposing model, i.e. investigating observers’ individual memories. Using detailed interviews, she senses the impact of dance on individual people and the memory value derived from it. In her 2012 documentary choreography Débords. Reflections on The Green Table about Kurt Jooss’s legendary work Der Grüne Tisch (1932), a pacifist piece in the dance theatre genre, she presented an array of potential memory spaces in which dance is brought into the present as a narrated memory –interview recordings displayed on screens that are shifted by dancers in movement. The issue of tradition in the context of movement-based cultural assets puts lots of disciplines to the test, even, and possibly particularly, historiography. At the same time, no other cultural practice affirms to the same extent as dance the possibilities for both a collective as well as physical memory.

Franz Anton Cramer is a research associate in the DFG project Records and Representations at the Berlin University of the Arts. He was previously a guest scholar in the archive and documentation department at the Centre National de la Danse in Paris, as well as project officer for the Cultural Heritage of Dance division of Tanzplan Deutschland.

The focus of Paula Rosolen’s piece was on the pianists who accompany dance rehearsals as co-répétiteurs and are living dance archives in themselves.MORE

Working with her eight dancers, the composer Sven Kacirek and a ‘chor de ballet’, Antje Pfundtner devoted herself to the images inherent in The Nutcracker, one of the most famous works in Western dance history.MORE